This might also fit under the "Work Hard and Good Things Happen" Thread.

Red Don said:
This might also fit under the "Work Hard and Good Things Happen" Thread.

I hope someone with access to the information will keep us information of the Pan Am Cup.
M

Gratefully Purloined from USA Volleyball:
The U.S. Women dominated from the service line and led in aces 14-0. They also led in kills (39-10) and blocks (7-0) and scored 75 points on opponent errors while committing 20. Every player on the U.S. roster saw time on the court.

“We kept our service pressure strong the whole match,” U.S. Head Coach Dan Fisher said. “It was a good opportunity for us to play a lot of players. We are a new team together. The hitters and setters are still learning from each other. We’ve only trained for a week, so it was a nice beginning for us.”

Outside hitter Chloe Chicoine led the United States with 13 points on a match-high 10 kills (.769 hitting efficiency) and three aces; opposite Merritt Beason scored eight points on six kills (.556), one block and one ace.

The U.S. Women had a .712 hitting efficiency behind starting setter Rachel Fairbanks and Alexis Stucky, who started the third set.

Middle blockers Bekka Allick, Bre Kelley and Raven Colvin and opposite Devin Kahahawai each scored six points. Allick scored on six kills. Kelley had three aces to go with three kills. Colvin had two blocks and one ace with three kills. Kahahawai finished with five kills and one block.

Fisher started Fairbanks at setter, Chicoine and Sis at the outsides, Allick and Kelley in the middle, Beason at opposite and Rodriguez at libero.

Looks like the Canada game is today, Wednesday, at 5pm PT.
M

The U.S. Women (2-0) will play Argentina (2-0) at 7 p.m. PT on Thursday to determine the pool winner. Watch live at facebook.com/babisuritv. The top two finishing teams at the Pan Am Cup will qualify for the 2023 FIVB World Championship.

Each set stayed close until the teams reached double figures, when the U.S. Women would pull away. In the third set, Canada led by two before the U.S. Women could come back and win.

“We started off every set too slow,” U.S. Head Coach Dan Fisher said. “Canada changed No. 4 (Emoni Bush) to opposite and it was good for them.

“We will study Argentina. They have very strong attackers, and it will be a tough match. I am confident that my team will do well.”

Opposite Merritt Beason led the U.S. in scoring with 11 points on seven kills, two blocks and two aces. Outside hitter Norah Sis added 10 points on eight kills and two blocks.

Devin Kahahawai, who subbed for Beason at opposite, scored five points on a team high three blocks and two kills. Middle Bekka Allick scored three points on two kills and an ace. Setter Alexis Stucky, who subbed for starter Rachel Fairbanks and started the third set, scored one point with an ace.

Fairbanks and Stucky combined to set the U.S. Women to a .257 hitting efficiency. Canada hit .151.
M

I wonder if Coach Fisher had input in the selection of the players or if the team was assembled by Karch and his staff?
M

“We were playing very consistently, I liked how we performed both offensively and defensively,” U.S. Head Coach Dan Fisher said. “Congratulations to Argentina for changing the game with a very strong service game; that got the crowd going. I thought we settled back in the middle of the fourth set, by receiving the ball better and we got some nice contributions from Elia Rubin coming off the bench. We are excited for the playoffs.”

Argentina led the fourth set 11-6 when the U.S. used a 6-1 run to tie the score at 12s. The teams battled back and forth. Argentina took set point at 24-23, but the U.S. fought it off with an attack from Beason. A U.S. error gave Argentina a second set point at 25-24, but Sis scored a point with a kill.

The U.S. took match point on an ace from Sis and won the match on a block from Kelley.

Opposite Merritt Beason led all scorers with 28 points on a match-high 25 kills and three blocks. Outside hitter Norah Sis added 15 points on 13 kills, one block and one ace.

Outside hitter Chloe Chicoine had eight points on eight kills. Libero Lexi Rodriguez was credited with 19 digs and 14 excellent receptions.

Setter Rachel Fairbanks scored four points on one kill and a team-high three aces. She combined with backup setter Alexis Stucky to set the U.S. to a .288 hitting efficiency.

Rubin and opposite Devin Kahahawai, who both played as substitutes, each scored two points.

The U21 Team will play Argentina (4-1) in the final at 7 p.m. PT on Sunday. Watch live at facebook.com/babisuritv.

“We went out with defensive intensity,” Rodriguez said. “We knew they were going to be a scrapy team, so we just stuck to that.”

Every player on the U.S. roster got playing time and every player except Rodriguez scored at least one point.

Outside hitter Mckenna Wucherer, who subbed in the second set and started the third, added 11 points on seven kills (.462), three aces and one block.

Outside hitter Norah Sis, who started the first two sets, scored seven points on six kills and one block.

Middle Raven Colvin, who started the second and third sets, scored six points on a match-high four aces, one block and one kill.

Opposite Devin Kahahawai, who played as a substitute, scored five points on five kills.

Starting setter Rachel Fairbanks scored three points on one kills, one block and one ace. Fairbanks combined with backup Alexis Stucky, who started the third set, to set the U.S. to a .493 hitting efficiency.

I watched about half of the match. The libero for Chile played well but the defense generally, and their attack, was weak and error-filled. If our girls play together, with tight defense, they'll win the rematch against Argentina.
Last edited: Jun 13, 2022
M

U.S. opposite Merritt Beason was named tournament MVP and Chloe Chicoine of the United States was named Best Spiker.

Beason led the U.S. in scoring on Sunday with 17 points on a team-high 14 kills and a team-high three blocks. Middle blocker Bekka Allick added 14 points on 12 kills and two blocks.

“Going into the third set after losing the second, our minds were set on working hard, focus on the controllable and loving hard on each other because we are all such competitive, independent strong women that uplift one another,” Allick said. “When I’m given the opportunity, I always take advantage, everyone gets their moments, I’m on a great team.”

The U.S. won the first set without much trouble. Argentina turned up the pressure with its serving and blocking in the second set and the U.S. struggled to respond.

“I think the players were feeling a little tense for a while, but we worked through it and settled down in our reception,” U.S. Head Coach Dan Fisher said. “We also got some nice energy from players coming off the bench and ended the fourth set playing good volleyball. Argentina is very good and put a lot of stress on us with their serves, but that’s what good teams do.”

Argentina rode the momentum into the third set where it opened a 5-0 lead. Argentina still led at 16-13 when the U.S. scored three straight points behind the serves of middle blocker Bre Kelley to tie the score at 16-16. Trailing 18-19, the U.S. used another serving run by Chicoine to lead 21-19 and it did not trail again in the set.

The U.S. held an 8-6 lead at the first technical timeout of set 4 and did not relinquish it.

Outside hitter Mckenna Wucherer, who entered the match as a substitute in the second set and started the third and fourth, scored seven points on six kills and one block.

Outside hitter Norah Sis started the first and second sets and scored two points on a kill and a block. Outside hitter Elia Rubin, who played as a substitute, scored one point with a kill. 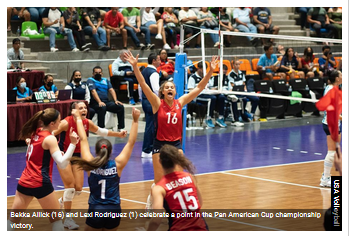 "Going into the third set after losing the second, our minds were set on working hard, focus on the controllable and loving hard on each other because we are all such competitive, independent strong women that uplift one another," Allick said after the match. "When I'm given the opportunity, I always take advantage, everyone gets their moments, I'm on a great team."
Click to expand...