10 Year Member
I am a little surprised that we stayed at #5 in the rankings after losing to PSU. The Nittany Lions moved ahead of us in the polls. That is a loss that we should not have.

Four teams mentioned on only one ballot for a total of seven combined points.

I was a little surprised that Nebraska stayed at No. 5. I had predicted that they would fall to No. 6 and that Penn State AND Pittsburgh would jump over them. Instead the coaches did the B1G a solid, by moving the B1G team (The Cult That IS Penn State), who won two matches against ranked teams (Purdue and Nebraska) and pushed them up to No. 4, kept Nebraska in their same slot even though Big Red split their matches, and didn’t move Pittsburgh up even though they won twice against mediocre competition in their weak conference. I had predicted that Pitt would move to 4, but I’m glad the coaches are taking into account conference strength.

BYU won twice against inferior opponents while Stanford was beating the ranked Washington schools at home. Even though the gap between the two is dwindling, I don’t see BYU surrendering the top slot. The Cougars are in for a rude awakening come tournament time though, when their 2nd round opponent will be miles better than anyone in their conference; their toughest opponent since non-conference play.

Minnesota concluded the week by beating the Illinois schools at home, including a sweep of 7th ranked Illinois, and stayed solidly at 3. They are the only B1G conference team with no losses in conference play; all other B1G teams have at least 2 conference losses.

UT@SUCKS lost for the first time in conference, to the Jayhawks at Lawrence. KU had a mediocre 6-4 non-conference, but has steadily improved in conference play and are now the only unbeaten conference team in the Big 12. The Pollsters punished the Shorthorns and dropped them all the way from 4th to 8th. Illinois split their week by beating Wisconsin in 4 (a good match where 3 of sets went to deuce, including one that ended 35-33) and remained at 7th. Wisconsin also split and ended up in 9th. Creighton had two victories (Villinova and Georgetown), Florida had two wins (the match against Georgia went 5), Cal Poly (they play in the Big West if you’re keeping track) only had one match and won easily, and Michigan impressively beat Purdue and Indiana and are tied for 2nd in the conference with only 2 losses. Soooo……..10, 11, 12, and 13 remain status quo for another week. Even though Purdue split with the Michigan schools, they remain at 17.

Then we get to the quagmire that is the PAC-12. Oregon has to be the most schizophrenic team in the country. They establish themselves as the clear number 2 in the conference, then they lose to both Arizona schools at home dropping from 12 to 20 nationally. The next weekend they crush the SoCal schools sweeping each of them and moving up to 14. Then, this week, they split with the Mountain Schools, losing to Utah in 4 and drop to 16. USC and UCLA swept the Arizona schools but didn’t move a bunch in the polls. However, ASU dropped out of the top 25, and Arizona is clinging on AT 25. Washington State lost twice during the week including a BAD loss to California. They dropped 2 notches to 23.

Kansas moves into the poll at 22, and somehow Baylor remains in the top 25 even though they have 3 losses in a relatively weak conference and are 12 – 6 overall.

Nebraska lost a match they shouldn’t have at Cultist Valley. They were the superior team, the Blue and White literally tried to give set 1 away, but the Huskers said no dice. Now, ominous dark clouds are forming on the horizon for the Big Red and they are forming fast. The B1G Northern Tour is undoubtedly the toughest in D1 volleyball, opponent wise. The thing that makes it somewhat bearable is that both Minnesota and Wisconsin have updated their facilities. Friday night the Huskers will play in the newly expanded Wisconsin Field House in front of 7000 plus fans. The following night, the Gophers will draw over 5000 to recently renovated Maturi Pavilion. Both matches will have a high energy, electric atmosphere to them.

The Huskers probably need to take both matches to keep the dream of the B1G championship alive. For certain, they at least need to beat Minnesota and then hope for help. If that doesn’t happen, Nebraska will likely have to adjust their B1G goals and start looking more singularly in peaking for the Tournament.

To reflect a bit, this version of Nebraska Volleyball is entertaining to follow and watch. Albeit sitting a thousand miles away, the character and personalities of the players make the journey through the season enjoyable. Cook gave them Monday off. I had to smile when I saw their endeavor for a day without practice:


This team is easy to like and easier to get attached to. Regardless of what happens this weekend, when Sunday morning rolls around, I’ll still be pulling for the Fightin’ Schwarzenbachs. And keeping the faith.

Not a big fan of the RPI. It always leaves me scratching my head in disbelief.

carrolltonsker said:
I am a little surprised that we stayed at #5 in the rankings after losing to PSU. The Nittany Lions moved ahead of us in the polls. That is a loss that we should not have.

Four teams mentioned on only one ballot for a total of seven combined points.

I agree with the our Huskers staying at #5; we played 5 sets on their court, and it was highly competitive.

carrolltonsker said:
Not a big fan of the RPI. It always leaves me scratching my head in disbelief.
Click to expand...

Yeah, have to agree! Our conference is the toughest, but they don't recognize that?

CrnhskrBob said:
Yeah, have to agree! Our conference is the toughest, but they don't recognize that?

Don’t worry...Nebraska will prove it where it counts... on the court. 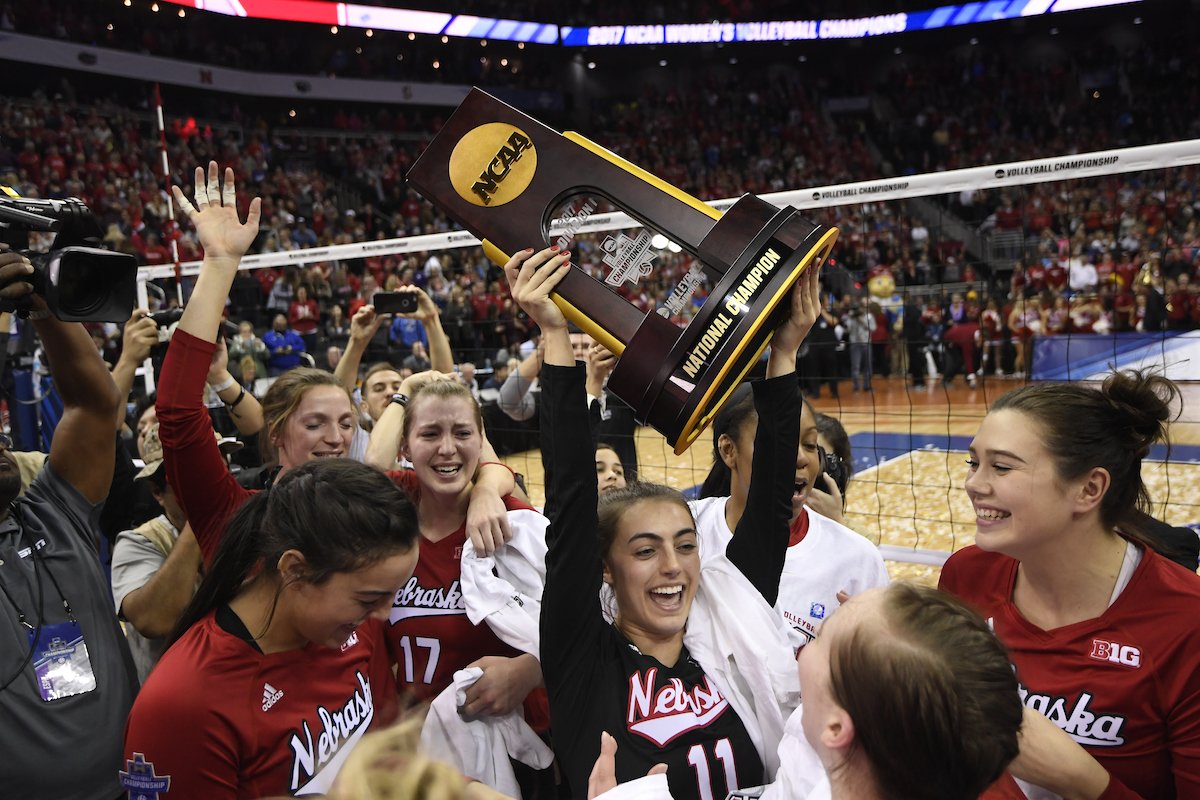