Proper Replacement For Our Balloons?

HuSkaBob said:
Helium is the problem for baloons... limited amount accessible on our planet. Also putting plastic / rubber everywhere isn't ideal, but it's all about Helium needed for medical uses.

Maybe we should throw frozen oranges?
Click to expand...

Maybe politicians could be enlisted to inflate them with their hot air.

the fountainhead said:
I think they generally just go around looking for excuses to pitch a fit.
Click to expand...

That's exactly what they do..... you nailed it! If they aren't bitching about something they aren't happy.

HuSkaBob said:
Helium is the problem for baloons... limited amount accessible on our planet. Also putting plastic / rubber everywhere isn't ideal, but it's all about Helium needed for medical uses.

Maybe we should throw frozen oranges?
Click to expand...

This is a pretty good article regarding the "so called" helium shortage...

When helium’s price goes up—like it has for most of the past few years—natural gas companies are incentivized to sell extracted helium on its own. Countries like Qatar mine so much natural gas that even though it has relatively little helium, they can crank out a decent percentage of the world’s demand as an afterthought.

Most of the remainder currently comes from the Federal Helium Program’s underground tanks in Amarillo, Texas—though that’s changing. The US government started stockpiling helium back in the 1920s (when blimps were a viable wartime strategy) but they really got serious about it in the 1960s. “From ’62 to about ’75, they purchased about 34 billion cubic feet of crude helium,” Burton says. They’ve sold most of that off over the last 20 years or so, with the aim of closing their doors in 2021. Inconsistent and last-minute legislation about the rate of the selloff has helped to drive helium prices up over that time.

Increased prices usually mean lower supply, but that’s not true for this gas. “There is actually so much helium that’s flooding the market that it’s not in short supply at all,” Burton says. And as for the future, “I’ve seen a lot of talk about this global shortage of helium—that’s actually not the case. In the United States, we’ve got at least 20 years of known supplies that are easily, readily available.” There’s far more worldwide—including now this new rich deposit found in Tanzania. In 2014, the US Department of Interior estimated that there are 1,169 billion cubic feet of helium reserves left on Earth. That's enough for about 117 more years.

Helium isn’t infinite, of course, and it remains worth conserving. Many research labs, for instance, have developed ways of catching and recycling helium instead of letting it escape through cracks in (or just the outlet of) their experiments. But next time you see someone with helium balloons, don’t berate them. Enjoy the party instead.
Click to expand...

Husker Bones said:
I'm pretty sure we could find something about every university's traditions and call for a ban in the name of the planet. Go ahead and post some of them for me please, I could use a good chuckle today.
Click to expand...

We can start by sending peta to Florida state. Riding a horse in the stadium making that beloved animal carry that heavy Indian around the stadium has to be cruel.

Speaking of Indians, I think they need to leave our

10 Year Member
Throw this onto the field ....Red Salmon
Then Smoker can pick it all up for the next tailgate...win win

2 Year Member
How about we don't cow tow to these social justice warriors and do what we want. Maybe even double the amount of balloons. One for each half.

5 Year Member
Everyone gets their own viener schlinger. 1st touchdown becomes an epic sausage fest. 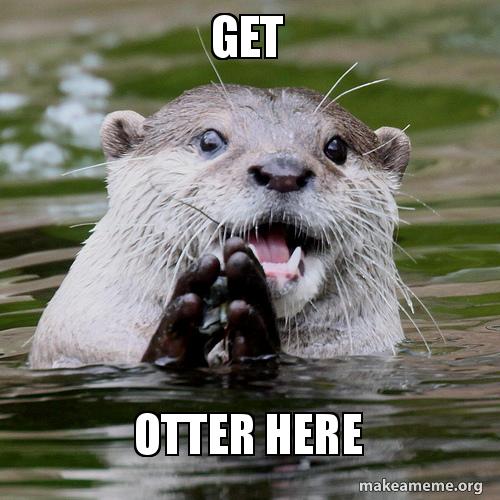 This is one of my son's favorites...otters are his favorite animals.

5 Year Member
Can we throw bloody Hawkeye helmets on the field?