Locked due to no posts in 60 days. Report 1st post if need unlocked Pelini interested in the Purdue job?

1standten said:
You're referring to this tirade? :
A) He got two seprate unsportsmanlikes in the 4th quarter. It was a long period of multiple outbursts to the point they had to call in a police escort for the officials to protect them after the game! Outlined here: http://footballscoop.com/news/bo-pe...eam-a-game-and-some-things-just-never-change/

B) 45 coaches would act that identical way??? Watch the replay again. I bet you couldn't find even 2 or 3 FBS coaches that would react to that degree.

C) That's hardly the only time Bo has lost his temper at Youngstown. Just ask this girl: 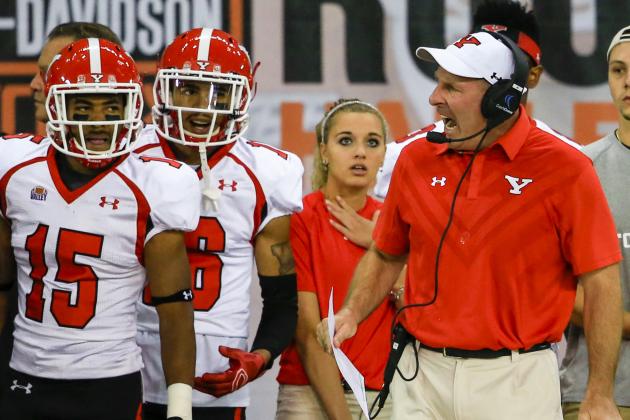 So I got asked if I was related to Bo... are you related to SE? Coaches yell and pictures of coaches yelling can be readily found anywhere...

This guy is as scary as they come BTW...

Hotlanta Husker said:
We played nobody good enough to blow us out last year... very average Wisconsin, Iowa was not built to blow anyone out, Sparty maybe.... I appreciate the teams willingness to compete and the coaches finding ways to keep us in ball games... I will say that I was in Miami last year... we were getting blown out... They took their foot off the gas...
Click to expand...

5 Year Member
All due respect but Coach K is not comparable to Pelini. He yells occasionally, yes, but he's also one of the most highly respected basketball minds across any level. I've never seen him tear a kid or an official down on the sideline of a game so much so that you thought security should be involved.
B

Hotlanta Husker said:
Bo Pelini as far as I understand it has never been on a staff as a full time coach that had a losing record... he must be the luckiest guy on earth...

And I am not saying Smart is bad hire... I just think UGa fans are delusional... just like them claiming that they dont have talent... They just lost to Vandy... talent was not the issue last weekend... but they are all chicken little squawking on the radio call in shows.
Click to expand...

He's was an excellent DC. Good programs come calling for guys like that.

5 Year Member
Good luck to Bo, good luck to Purdue but I hope every time we play them/him we smoke em by 45 pts or more.

2 Year Member
I don't care what he did on the sidelines so much as what he said about the fans when he thought his secret thoughts weren't being recorded.
B

Hotlanta Husker said:
I guess the one he is at and currently has ranked #12 in the country despite not having a quarterback might... Purdue wants to win... so did Louisville... guys get second chances.. right or wrong.
Click to expand...

The circumstances with Bo and Petrino are a little different.

Quite honestly Petrino is one of the top 3 or 4 coaches in college football. SOME think having a complete piece of trash running your program is worth what he brings in terms of wins and losses. From the "yuck" perspective I'd rather have Pelini back at Nerbraska before EVER hiring Petrino. I'd honestly burn any husker gear I owned if that guy ever came to coach at NU.

Ellis Boyd Redding said:
I have a lot of friends that are Purdue alumni. A lot.

I will send out a group text asking how they feel about the rumor that Bo Pelini is interested in the job and will report back later.
Click to expand...

The immediate responses to my group text are NOT at all what I expected.

I will give it more time, accumulate more responses, and post again tomorrow.

Hotlanta Husker said:
I seemed to recall it was 4th down and it was a heave because the QB was under pressure and scrambling but if I was mistaken... my apologies... I don't follow the Penguins like I follow a few other Valley teams that some friends work for.

He should not have lost it but it was a critical call and a turning point in the season against an almost mythical opponent (the Alabama of FCS).. it would feel very much like the Valley officials protecting their prized Bison team.
Click to expand...

The correct call was made, and Pelini's childish antics killed any chance YSU had of getting in FG range and tying the game.

5 Year Member
I think it would be interesting if BP got the gig. I think he can improve Purdue...but are they willing to pay the price of admission...which is his behavior.

Don't dislike the guy at all...just thought he was a poor choice for HC of DONU. From the first spit fit he laid on Granny Snyder when K-State lit up his D like a pile of tinder, I knew he was too volatile to handle the demands of a program like Nebraska. He would have been better off as a HC at a school like Youngstown first...then a school like Nebraska after some seasoning.

Self Quarantined b4 it was Cool

5 Year Member
Nothing stirs up the board like a good Bo thread.

HuskerInTexas said:
All due respect but Coach K is not comparable to Pelini. He yells occasionally, yes, but he's also one of the most highly respected basketball minds across any level. I've never seen him tear a kid or an official down on the sideline of a game so much so that you thought security should be involved.
Click to expand...

Who thought security should be involved?
C

2 Year Member
Would be interested to see. With that said the article by Wiltfong is hilarious!

"Pelini is a strong in-game coach and manages players well. The recipe to win at Purdue is similar to Nebraska where it’s tough to recruit and it’s more about picking the right guys, developing and building a winning culture."

A: LOL Strong in-game coach? Are you kidding me??? The last staff seemed to be absolutely TERRIBLE at adjusting on the fly (Melvin Gordon just scored again!). Rarely ever was the team able to rebound once things started to go south.

B: Partially true I suppose. But Riley doesn't seem to have a tough time getting top-notch talent interested in the program. Has had the #1 rated player and OT, the #1 and #2 rated WRs, the #1 rated DB, and now has the #1 rated athlete coming for a visit this weekend in addition to a whole lotta other very talented players that have already visited/committed. Fact is while Nebraska isn't a "sells itself from the get-go" type of place, Bo made it harder than it had to be.

"This is the right time for a guy like Pelini at Purdue as the school invests 60 million to rebuild its football facilities. Another coach in the Big Ten said when the Boilermakers are done they’ll have the best facilities in the conference."

bilsker said:
He's was an excellent DC. Good programs come calling for guys like that.
Click to expand...

Ellis Boyd Redding said:
The immediate responses to my group text are NOT at all what I expected.

Don't be a tease...what were the responses?