NEW POLL: Is Rhule the coach?

Red October said:
Just so yall know, Matt Rhules NFL record and Mike Rileys are the same. Yussss saying all this garbage about the NFL being a different beast is nonsense, its played with the same ball on the same field with the same players. It counts.
Click to expand...

So based on NFL Nick Saban cant coach.

1standten said:
Three of the all-time greats might disagree...but don't let stats stand in your way.

Obviously not rare that some good college coaches couldn't make it work in the NFL. In fairness to Rhule his college record is a bit deceiving considering the situation he took over at Baylor and did a great job quickly turning things around in 3 years imo. 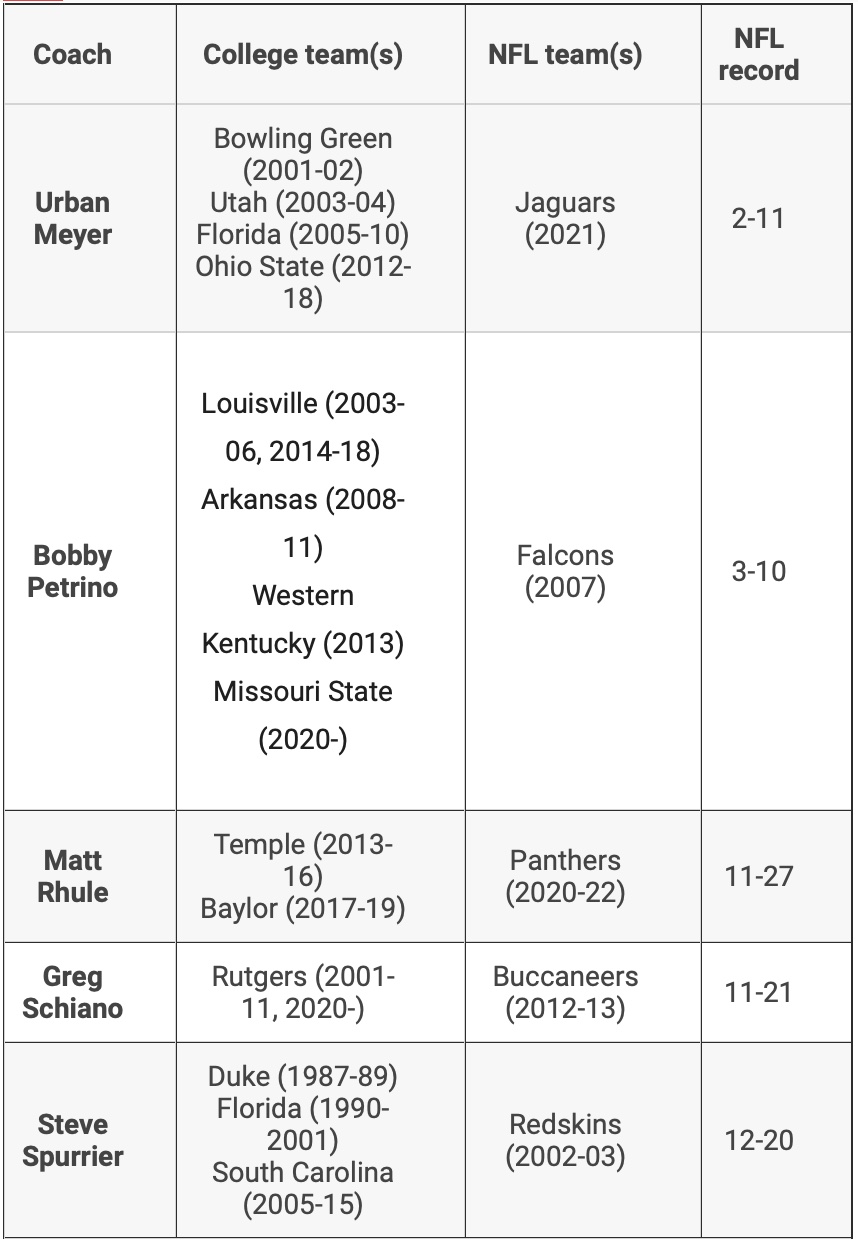 Whereas a college coach can stockpile talent through recruiting and simply beat lesser teams into submission, the NFL has the draft, salary cap and free agency to effectively maintain parity. Meyer was a particularly notable example of this, especially when he infamously didn't know who Rams defensive lineman Aaron Donald was.

Let also remember following the threat of a lawsuit by Briles for wrongful termination, Baylor provided an out of court settlement. Briles and Baylor are co-defendants in a lawsuit filed by a woman allegedly sexually assaulted by a football player. After Briles' departure, many players announced their intention to transfer including Jarrett Stidham. Seven members of the 2016 recruiting class requested to be released from their National Letter of Intent and six of the then-seven commits in the 2017 recruiting class decommitted. Rhule took a team that was basically destroyed from 1-11 his first season to 11-3 in his third season. I would bet that's a significant factor in his possible hiring for the job of rebuilding the Huskers imo.
Last edited: Friday at 3:42 AM

I wonder what Tom would have done if he hadn’t retired early. How many of Saban’s titles came after he turned 60?

LoneTreeHusker said:
I wonder what Tom would have done if he hadn’t retired early. How many of Saban’s titles came after he turned 60?
Click to expand...

Yes indeed. Osborne had things rolling when he retired at age 60, still in good health and as sharp mentally as ever.

SavageHusker said:
Rhule is a fallback IMHO
Click to expand...

LoneTreeHusker said:
I wonder what Tom would have done if he hadn’t retired early. How many of Saban’s titles came after he turned 60?
Click to expand...

We will never know, but highly unlikely he would ever win 4 more, pal. I’ll stick with Nick.

You obviously haven’t spent much time in Tuscaloosa.

WestTexasHusker said:
You obviously haven’t spent much time in Tuscaloosa.
Click to expand...

Nope, and never want to. But there are WAY more high ranking recruits near there than there is Lincoln.

WestTexasHusker said:
What is your level of confidence that Matt Rhule is NU’s next head coach? I feel as though it is signed and sealed. Otherwise, we would be getting a lot of leaks on the back-and-forth.
Click to expand...

Just last night on Twitter, I read Rhule was a smokescreen for Fickel. Then, later, I read where Dave Doren had interviewed this past Sunday. My head is going to explode.

Suhperman said:
If he is, hopefully he forgets everything he learned in the NFL except for the fact that losing sucks.
Click to expand...

Being he tried to run the Panthers with a college coaching mentality, it won't be hard. I will say this, when he was here, with the Panthers, he worked his ass off. That's the part I really liked about him.
1

Doug Miller said:
Just last night on Twitter, I read Rhule was a smokescreen for Fickel. Then, later, I read where Dave Doren had interviewed this past Sunday. My head is going to explode.
Click to expand...

I'd like to believe Trev and the consulting firm identified a group of 4-5 quality candidates and Trev interviewed all that expressed interest. If he/they just zeroed in on one guy and the rest were merely decoys, then they didn't do NU justice.

10 Year Member
Trev has his guy.

Has had him for a while imo.

Just waiting for the announcement.
Last edited: Friday at 10:40 AM

Doug Miller said:
Just last night on Twitter, I read Rhule was a smokescreen for Fickel. Then, later, I read where Dave Doren had interviewed this past Sunday. My head is going to explode.
Click to expand...

I have no idea if Dave Doeren is or ever was a serious candidate for the Nebraska job. But he may have good reason to want to get out of North Carolina. 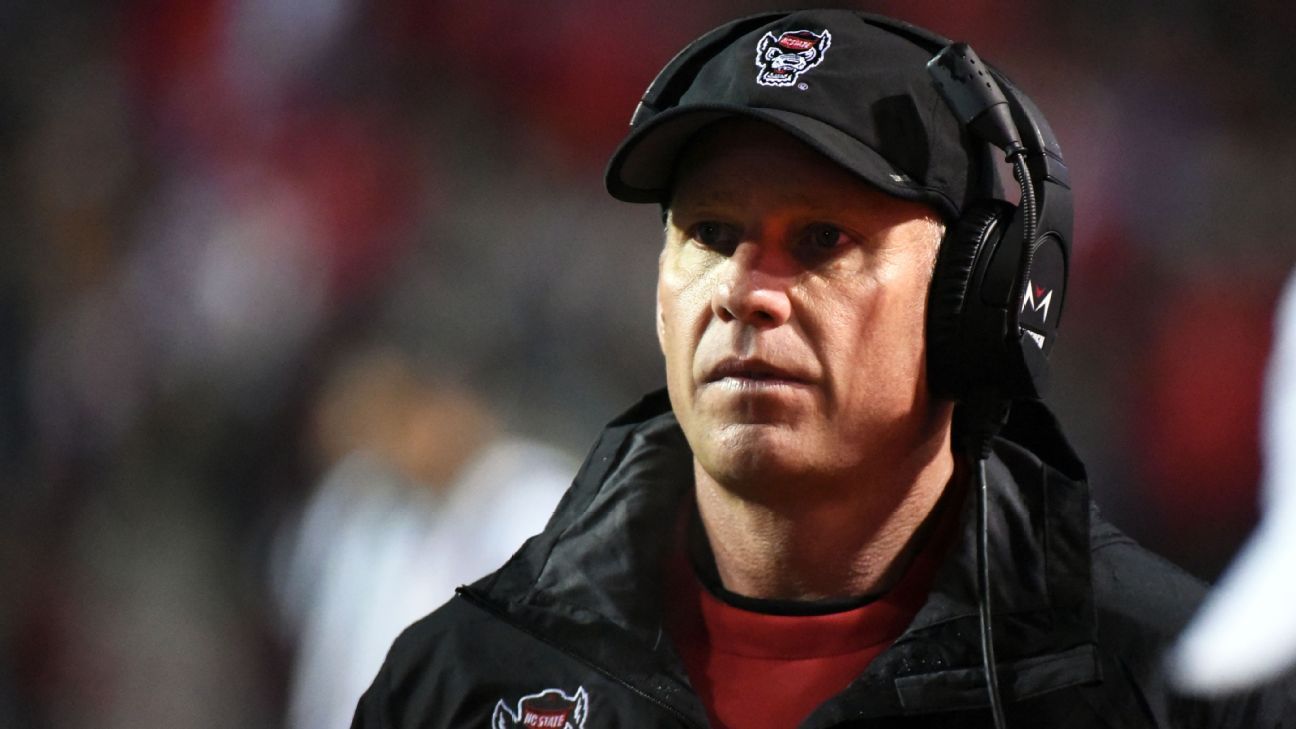 The arrest stems from a tweet reportedly sent by Joseph Boletepeli, 22, a member of the 2018 and 2019 NC State football teams, saying, "Imma get him I promise. Dave Doeren and the rest."
Click to expand...

5 Year Member
I'm not saying it is Rhule and I'm not making any predictions. (If I did I would be performing a lot better on Fan Duel than I am.)

1. Yes, I wanted him gone from the Panthers, but only because he was coaching them with a college coach mindset, as opposed to an NFL coaching mindset.
2. He worked his ass off.
3. He ran as full of contact (blocking, pads and tackling) practices that the NFLPA would allow.
4. He took ownership in press conferences.
5. He is very loyal to his team.
6. He came to the Panthers in the Covid year with very little physical contact with the players. That was a huge disadvantage for all coaches, especially for a new guy.
7. Regarding the $40 million in his pocket? The Panther owner was so smitten with Rhule, during their interview, he offered a, ridiculous, 7 year $70 million plus contract. Rhule, in not so many words, was shocked. I would have jumped on it too!

The bottom line is this. If it's him, I think you will like him. He has a dedicated work ethic. Will we win a Big 10 championship with him? I don't know, but we will win games, upset some teams and go to bowl games. (I've said this before, if he talked Joe Brady (QB coach of the Bills) into coming with him as QB/OC and pairing him with Mickey, just like Odgeron had at LSU with Burrow, Jefferson and Chase... ooooh baby what a team they would make on offense.)