Huskers Fall to No. 24 Penn State Huskers Fall to No. 24 Penn State - University of Nebraska

Lincoln – Haanif Cheatham had 15 points and eight boards to lead three Huskers in double figures, but Nebraska could not sustain a strong start in a 76-64 loss to No. 24 Penn State Saturday night at Pinnacle Bank Arena. Lincoln – Saturday night's game against No. 24 Penn State is the Huskers' annual Coaches vs. Cancer Suits and Sneakers Game.

Nebraska (7-14, 2-8 Big Ten) looks to snap a six-game losing streak following a 79-68 loss against Michigan on Tuesday. In that game, Nebraska led 52-50 before Michigan used a 19-3 run to take the lead for good. Cam Mack led three Huskers in double figures with 19 points, nine assists and seven rebounds, while Kevin Cross and Haanif Cheatham each added 17 points in the loss.

SCOUTING PENN STATE
Penn State won 13 of its first 15 games to open the season, including wins over nationally ranked Maryland and Iowa as well as Georgetown, Syracuse and Alabama. After a three-game losing streak, the Nittany Lions have bounced back and won three straight with wins against Ohio State, at Michigan and Indiana. PSU, which leads the Big Ten in steals (8.7) and blocked shots (5.7) has been stout on the defensive end, holding 13 of its 20 opponents to 70 points or less this season.

Penn State plays a nine-man rotation and features one of the Big Ten's premier players in senior forward Lamar Stevens, who averages 16.7 points, 7.1 rebounds and 1.2 blocks per game. Myreon Jones is the only other PSU player in double figures at 13.9 ppg, while also hitting on a team-high 44 3-pointers. Fifth-year senior Mike Watkins averages 9.8 points, and team-bests in both rebounding (7.8 rpg) and blocked shots (2.9 bpg). Jones, along with Myles Dread and Curtis Jones account for 108 of the Nittany Lions' 156 3-pointers this season. The Nebraska men's basketball team continues its two-game homestand Saturday night, as the Huskers host Penn State. Tipoff is at 6:01 p.m. and any returned tickets will go on sale at the Pinnacle Bank Arena box office beginning at 4:30 p.m. on Saturday.

15 Year Member
The crowd was as dead as the team last night. Hope someone shows up this time.

(I'd be afraid to miss one, just in case that was one they decided to 'turn it on.')

Staff member
5 Year Member
'The Skinny' (from another site

The Skinny:
This shouldn't be one of those Nebraska - Penn St rock fights of the past. Pat Chambers has his team playing at a similar tempo to Nebraska and Lions very much look like they're finally going to make the tournament in his ninth year. This could also be his first team to win on the road at Nebraska.

Offensively Chambers is pushing the pace this year so this game has the makings of a track meet. Look for Penn St, with their starting lineup of shooting and speed surrounding Stevens to try and open up a lead off the bat. At points given their obvious height advantage look for Penn St to slow it down and work the ball inside. Defensively Penn St is one of the top teams in the conference but their inability to defend without fouling nor to secure rebounds at an elite level has really held them back. Nebraska's 5 out offense should give this team fits at times. The chess match of centers could be interesting as if you're looking for an excuse to start Cross and save Yvan's bulk for Watkins, tonight is that night. Cross vs Watkins is a battle of guys who won't be able to guard each other well.

Like most every game, Nebraska is going to attempt to turn Penn St into a 3pt shooting team and hope they don't get hot. This typically works better at home than on the road. Look for enough running in this game to make Nebraska feel good about themselves offensively. Will that be enough to beat this better team? 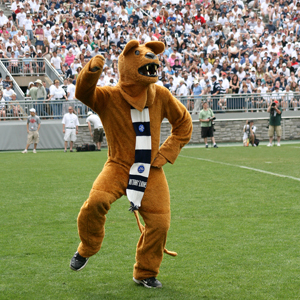 5 Year Member
There goes are only chance

Can They Finish Strong?

It's a Fast Game. We're just going to have to Slug it out with Penn State.