The Huskers (6-10, 0-5 Big Ten) look to bounce back from a disappointing 93-65 loss at Rutgers on Saturday afternoon. Nebraska shot nearly 50 percent from the field, but Rutgers shot 58.3 percent from the floor, including 10-of-18 from the 3-point line. Rutgers took advantage of 14 Husker turnovers and turned them into 25 points.
- Bryce McGowens finished with a game-high 17 points on 5-of-9 shooting to lead three Huskers in double figures. The freshman tops the Huskers in scoring at 15.7 points per game and is also second on the team in both rebounding (5.5 rpg) and assists per game (1.8 apg).
- Derrick Walker continued his run of double-figure efforts with 12 points and six rebounds while pacing the Big Red with 6.3 rebounds per game.
Click to expand...

Illinois brings back a veteran squad led by preseason All-American Kofi Cockburn and fifth-year senior Trent Frazier. Illinois started 2-2, as Cockburn missed Illinois first three games, but has won 9-of-10 with the only loss being a four-point setback to Arizona on Dec. 11. Since that loss, Illinois has won all four of its games by double figures.

The Illini are shooting 47 percent from the field, including 39 percent from the 3-point arc while averaging 10 3-pointers a game. Cockburn paces the attack by averaging 22.5 points on 62 percent shooting and 12.5 rebounds per game.
Click to expand...

20 Year Member
I hope Fred gets them to play smart, team basketball

20 Year Member
Let's hope we swim upstream of the metrics. 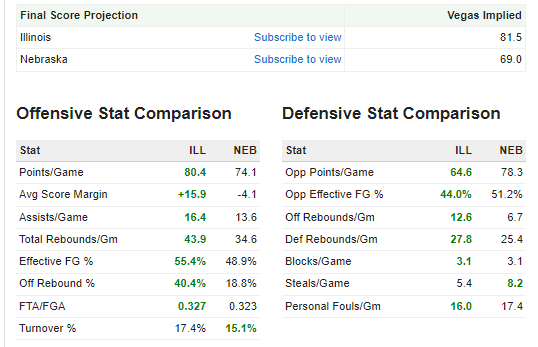 Here is what you need to know going into Nebraska's home game No. 25 Illinois tonight at Pinnacle Bank Arena.

1. Try to contain Kofi
Nebraska won’t face a much bigger challenge - both literally and figuratively - Nebraska will have to pick its poison, but its only hope is going all-in on stopping Cockburn and hoping Illinois goes cold from deep.
Click to expand...

2. Defend without fouling
Saying you’re going to commit to stopping Cockburn, but it’s an entirely different challenge to do so without racking up fouls in your frontcourt - The Huskers have to match Cockburn’s physicality and must be smart in how they defend and not take unnecessary chances.
Click to expand...

3. Get Verge going again
For better or worse, no player ultimately defines Nebraska’s overall success more than Alonzo Verge Jr. - Given how poorly and inconsistently Nebraska has played offensively this year, it’s clearly limited with how many weapons it can lean on to win games in the Big Ten. Verge is one of them when he’s playing well, and he needs to get back to his old form as soon as possible.
Click to expand...

15 Year Member
Our elite basketball skills must have worn Rutgers out. They are getting pounded by PsU

5 Year Member
So far we look about as good as I’ve seen us.

15 Year Member
Kofi is a beast