McGowens had a team-high 17 markers for the Huskers, while Derrick Walker Jr. finished with 12 points and six boards. C.J. Wilcher added 11 points off the bench for Nebraska, which shot 49 percent, but committed 14 turnovers which led to 25 Rutgers points.

Nebraska got off to another good start and was in solid position before Rutgers (9-5, 3-1 Big Ten) took advantage of some Husker foul trouble late in the first half to key a decisive run. Nebraska would get to within 15 on three occasions, the least at 63-48, but could not cool down a Scarlet Knight attack that hit 10 of its first 14 shots after the break and shot 66 percent in the second half.
Click to expand... Nebraska wraps up a two-game road trip Saturday afternoon, as the Huskers travel to Rutgers for a matchup with the Scarlet Knights. Tipoff from Jersey Mike's Arena in Piscataway, N.J. is slated for shortly after 1 p.m. (central) and the matchup will be carried on the Big Ten Network and the...

The Huskers (6-9, 0-4 Big Ten) comes off a 79-67 loss at No. 10 Michigan State on Wednesday. Behind a solid start and strong play from Derrick Walker Jr., the Huskers were within striking distance for most of the contest, trailing 60-54 with just under seven minutes remaining, but Michigan State used a 12-2 spurt to pull away.
Click to expand...

Rutgers comes into Saturday's game as winners of four of its last five games, including a 75-67 win over Michigan on Tuesday night. The Scarlet Knights are coached by Steve Pikiell, who is in his sixth season at the school. Last year, Rutgers went 16-12 and earned the program's first NCAA bid since 1991 before falling in the final minute to a Houston squad which reached the Final Four. Rutgers returned three starters and 12 letterwinners from last year's NCAA Tournament team.
Click to expand...

20 Year Member
This is our best chance at a road win according to analytics at TeamRankings.com 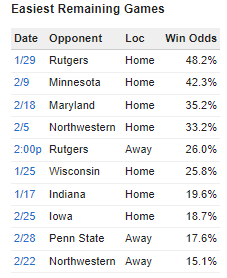 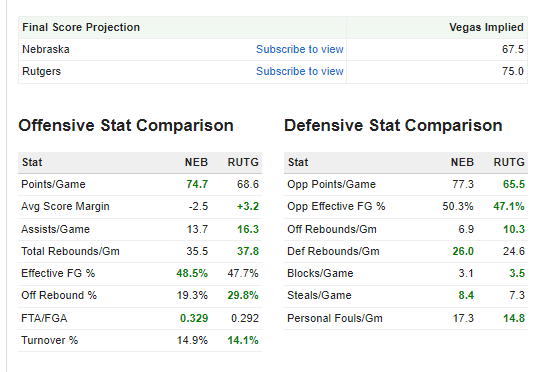 20 Year Member
turns out B1G conference is deep in basketball too...

keep playing like they have been of late - the past few games have been enjoyable.
Last edited: Jan 8, 2022

coherbie said:
turns out B1G conference is deep in basketball too...

keep playing like they have been of late - the past few games have been enjoyable.
Click to expand...

I think it was John Beilein who told Hoiberg that trying to rebuild in the B1G was difficult when half the teams were rebuilding -- it's even more difficult when you are the -only- team rebuilding.

That's probably not completely fair, but it sure seems like there's only one team that is always rebuilding.

Here is what you need to know going into Nebraska's road game at Rutgers this afternoon in Piscataway, N.J.

1. Manufacture the offense
Making 3-pointers will obviously be critical, but NU also must have excellent ball movement to create high-percentage looks and get to the foul line early and often.
Click to expand...

2. Try some different lineups
Verge will still start and play substantial minutes, but Hoiberg might be well served to try and balance how often Verge and McGowens are on the floor together based on recent performances.
Click to expand...

3. Keep running the offense through Walker
Walker has been Nebraska’s most consistently productive player all season, and he makes everyone else around him better when he’s a focal point on offense. That must continue.
Click to expand...

Staff member
10 Year Member
Better to get the Rebound in the first place than a reach-in foul later!

Staff member
10 Year Member
Sign in front says "Sold Out" yet only about 6,000 (8,000 cap arena). Have they ever thought about Double-selling tickets for the 'no-shows?'

Staff member
10 Year Member
We need Tominaga to get 'Hot!'

Staff member
10 Year Member
Getting killed on the offensive boards 4-1; NEED to BOX-OUT!!!!