Huskers Come Up Short at No. 10 Michigan State - University of Nebraska

Four Huskers scored in double figures Wednesday night at Michigan State, and Nebraska tied its season high with 12 steals, but NU struggled with its shot in the second half in a 79-67 road loss to the 10th-ranked Spartans.

Nebraska trailed by just four at halftime and it was still a two-possession game with seven minutes remaining before Michigan State pulled away with a 12-2 run. The Huskers hung in until the end despite shooting just 41 percent from the field in the second half. NU shot 45.0 percent in the game, but Michigan State knocked down 51.8 percent of its shots.
Click to expand... Huskers Tangle with No. 10 Michigan State - University of Nebraska

Nebraska faces its second straight ranked opponent on Wednesday night, as the Huskers begin a two-game road trip with a matchup against No. 10/10 (AP/Coaches) Michigan State. Tipoff at the Breslin Center is slated for 6 p.m. (central) and the matchup will be carried on the Big Ten Network and...

The Huskers (6-8, 0-3 Big Ten) had a golden opportunity for a marquee win, but No. 13 Ohio State rallied for an 87-79 overtime win over the Huskers on Sunday. Nebraska battled back from an eight-point second half deficit to take a 72-67 lead with under a minute remaining after Lat Mayen's dunk before the Buckeyes scored the final five points of regulation to send the game into overtime and scored the first six points of the extra session to take control.
Click to expand...

Michigan State (12-2, 3-0) comes into Wednesday's game riding a seven-game winning streak following a 73-67 win at Northwestern on Sunday. The Spartans two losses have been neutral-court setbacks to both Kansas and now #1 Baylor, while MSU has non-conference wins over UConn, Louisville and Loyola (Ill.) in addition to its 3-0 start in Big Ten play.

Gabe Brown leads MSU in scoring at 14.6 points per game while shooting nearly 40 percent from 3-point range. Marcus Bingham Jr. also is in double figures at 11.0 ppg, while leading the Spartans in both rebounding (8.1 rpg) and blocked shots (3.0 bpg). In all, MSU has eight players averaging at least 5.0 points per game. As a team, the Spartans hold teams to under 39 percent shooting and control the glass by more than eight rebounds per game.
Click to expand...

20 Year Member
Analytics say this is not going to go well for us; but, let's hope this is a "that's why they play the games" outcome. 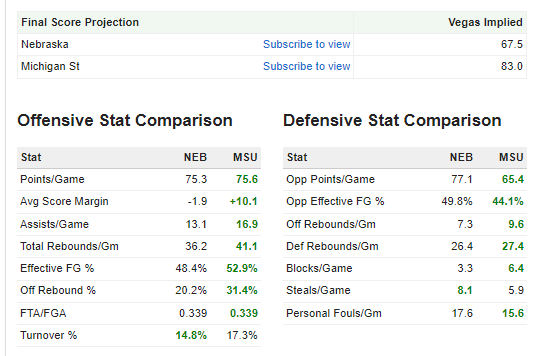 Here is what you need to know going into Nebraska's road game at No. 10 Michigan State tonight.

1. Keep up in transition
The Huskers struggled to defend transition 3-pointers last time out against Ohio State, and it cost them the game. They need to be on point in that regard from start to finish tonight.
Click to expand...

2. Fight on the boards
If the Huskers can battle on the boards as they did against Ohio State, where OSU held a +10 advantage but was even on offensive rebounds, they will at least have a chance. If not, it could be a long night in East Lansing.
Click to expand...

3. Be tough in the lane
The Huskers have to be aggressive and get the ball to the basket, but it also can't afford to try and force shots through traffic and have blocks turn into transition offense opportunities the other way.
Click to expand...

I think the huskers are a very good basketball team that is one good player away from a very good team with depth. When we get Trey back in the lineup for Mayen I think they will be much more competitive and will win the close ones like OSU and Michigan. The Michigan loss was discouraging as they had it. You could see the tension with Mayen at the line. Maybe he will be able to take a breath and relax the next time

(not a difference in the game (so far, we're beating ourselves), but not a help either , nor a credit to officiating) Lamont Simpson particularly egregious)

5 Year Member
Have to rebound to have a shot at this….

That’s the positive vibes I‘m used to on the Huskers board. WTG.

Ackos said:
Hoiberg is 1/24 in true road games at NU
Click to expand...

The team looks like it’s coming together the last three games. It’s going to get better.