Huskers in the Pros - Cain vs Whitish (in Sweden)


Cain to Clash with Whitish in Sweden​ 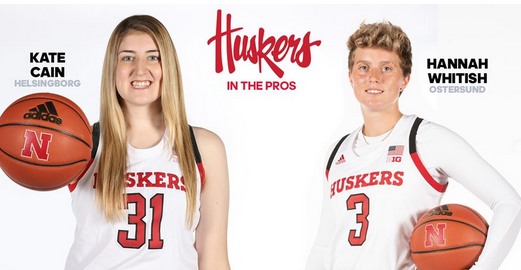 Cain to Clash with Whitish in Sweden - University of Nebraska

Cain participated in WNBA Training Camp with the Las Vegas Aces is the spring of 2021 before signing a contract with Helsingborg in Sweden for 2021-22. Through her first five professional games in Sweden, Cain is averaging 7.0 points, 9.4 rebounds and 1.8 blocks in 28 minutes per game as a starter.

Whitish, a 5-9 guard from Barneveld, Wis., was a three-year teammate of Cain's as a Husker. One of the top three-point shooters in NU history, Whitish closed her four-year career as a starter at No. 19 on the Nebraska all-time scoring list with 1,228 points. Her 258 three-pointers ranked No. 3 in Husker history, while her 470 assists rank No. 6 in the Big Red record books. A second-team All-Big Ten selection as a sophomore in 2017-18, she was a catalyst for a Husker squad that was the most improved team in the nation from the 2016-17 season to 2017-18, when she teamed with Cain to lead Nebraska to the 2018 NCAA Tournament.